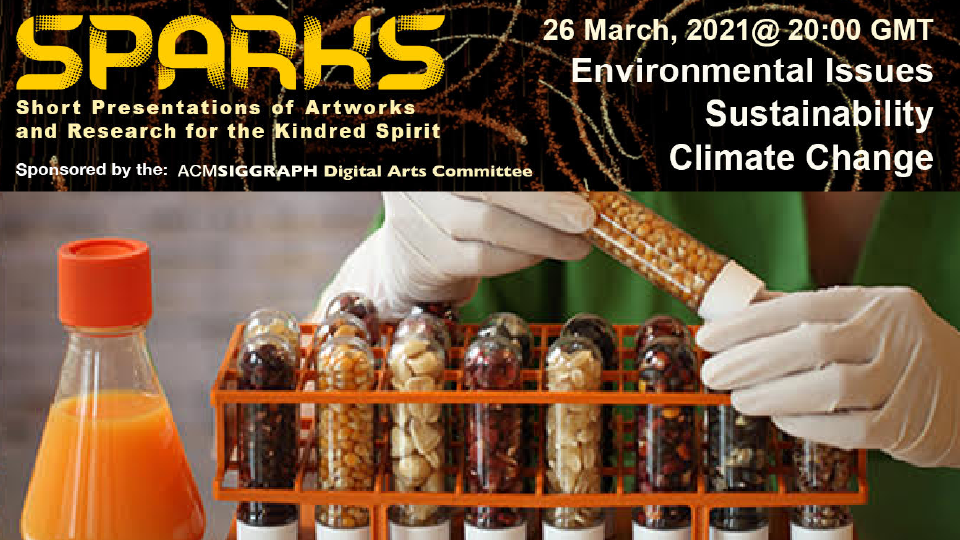 Climate change is not just a long-term environmental issue; it is happening now, and it entails major challenges for those trying to shape a sustainable future. The complex and interconnected web that makes life on earth possible continues to be under deep threat. While some of the decades-long damage is irreversible, in order to reduce further destruction and sustainably manage the planet’s future, coordinated scientific research, observation, knowledge-sharing, and policy making are needed immediately. These unfolding developments in sciences and technologies provide opportunities for insightful collaborative, experimental, and artistic approaches that might offer daring solutions.
SPARKS participants will present independent as well as collaborative and transdisciplinary artworks and research at the interface of artistic and scientific practices, with a focus on ecologies, new materialism, agency, methods & practices.

How Human Laws Must Accommodate the Laws of Nature

Rahmani will present complex ideas about balance and change in the justice system and how physics and biology determine sustainable life systems. As humanity confronts the possibility of joining the sixth extinction there might be ways to approach our problems through the prism of art and find solutions. This talk will highlight Aviva’s research findings which emerged from a series of interrogative projects, such as Ghost Nets, Fish Story and Blued Trees. We stand at a crossroads over environmental Issues, sustainability, and climate change. This is an opportunity to align principles of common good, culture and complexity theory as transdisciplinary activists.

Lalbagh TreeStory is an interactive Google Earth installation. Mechthild’s research as a Fulbright Scholar on ecology and art in India led her to explore the ecological, historical and cultural role of trees, the dichotomy of care and neglect in the Lalbagh quarter of Bangalore. Her ‘Engaged Media’ series addresses different aspects of the climate crisis. This latest project in the series reacts to the loss of hundreds of cooling avenue trees that were cut to make room for the Bangalore metro to lessen car traffic – two conflicting ecological needs, where money won over nature. The remaining trees live neglected in a film of dust and exhaust in stark contrast to their protected brethren in the adjoining Lalbagh Botanical Garden. Mechthild pairs texts on nature affirming quotes, healing and nutritional qualities with leaves and blossoms of Lalbagh trees for a ‘virtual’ replanting along the metro line. This work is in support of the Bangalore ecological citizen protests that called for awareness of and interdependence with nature.

Hybris* is an installation-based multimedia performance that presents an artistic reflection on climate change based on a metaphor of hybrid beings such as the Grolar–offspring of the Grizzly and Polar bear–that are characteristic to our era. The project is based on scientific research of temperature shifts over the last decades and its impact. All the information gathered is used to create images, data visualization and live video, articulated by a staged performance in a geodesic dome structure involving music, voice, performance and projections on multiple screens.

Hox Zodiac: Reimagining our relations to animals as food, pets and science partners

This work looks to ancient Eastern philosophies along with scientific research, seeking balance between rational and irrational, conscious and unconscious – in relation to our interconnectivity with the animal kingdom. Our perception and experience of the world around us is limited by an anthropocentric viewpoint – in part a physical limitation of our senses, but largely because we forget that as animals we share a great deal of commonality (genetic, ecosystems, biospheres) with the species around us, despite morphological differences. The presentation will highlight how we can reimagine our relationships to animals and relate to them as partners in issues of environmental sustainability and climate change.

VRestaurant: Food for Thought – the contribution of the virtual to the transformation of the real

VRestaurant: food for thought is an immersive, synesthetic, gastronomic and collaborative artistic installation that brings to the table some major challenges we face today in relation to the production and consumption of food, on a global scale. Will we be able to feed 10 billion people on the planet in a healthy and sustainable way by 2050? Global food production threatens climate stability and the resilience of ecosystems, causing accelerated environmental degradation on the planet. Unhealthy diets – both those that cause malnutrition and those that lead to obesity – are another source of concern about the future. Electronic art can help promote awareness, engagement and social change with regard to healthy diets and sustainable food production.

For 7 years now, a collective of artists and agricultural scientists have been collaborating on various projects. Recently, this collaboration expanded into inviting artists from outside the community whose work explored data physicalization to engage with specific data sets. The result was an exhibition that invited viewers to consider the implications of climate change, and to introduce them to research that was being done in their community. The two data sets that they explored are both drawn from research that is specific to growing crops in challenging times: The first is the result of an experiment on breeding cereal wheats and wheat grasses with the intention of developing a perennial wheat cultivar; the second relates to experimentation in genetic modification aimed at reducing wheat’s susceptibility to the devastating pathogen known as stripe rust.

Data Agency in the Science, Art and Trash Project

What means can we pursue to embody data? Science Art and Trash tackles how images, classifications and geolocated actions can map to mental models and affect behavior. Borrowing from the concept of agency in interaction design, the project seeks to explore how agency can be augmented to scales that are only accessible through data. One of the main issues that affect how the adult population understands climate change today is the disconnect between cumulative actions and pollution. We know about climate change primarily through evidence based on data, otherwise it would be accepted as something humans have nothing to do with. The project utilizes a well-established smartphone app called Litterati (see litterati.org) to locate, collect and classify garbage found in the streets of a community, in order to expose the process that goes from data into evidence to adults who did not grow up in a context fully informed by data like what we have today. The images captured were assembled into a mosaic image showcased in a local mini traveling exhibit in 2019, and after the pandemic into grids circulated in local social media groups.

Sustained Signage is an artistic project portraying the concerns of sustainability, including the destruction of the Earth through war, overuse of natural resources, global warming, and the exploitation of workers. The project consists of four short computer animated narratives and twelve silk-screen prints on metal, each having a pictographic style resembling road signs. The imagery and prohibitive text provide viewers with evocative narratives and ambiguous instructions, such as a pictograph of the Earth being cooked in a frying pan, and followed by the text DO NOT OVERCOOK YOUR PLANET IF YOU WANT TO KEEP EATING IT.

Pat Badani is an artist, writer and researcher who explores notions of utopia and dystopia through emergent art practices. Her artworks have been showcased in international museums, art centers, festivals, and symposia. She has received over twenty awards and commissions in the USA and Canada and was nominated for an AWAW award recognizing women of vision (2018); and an Art Matters Fellowship (2011). In 2020 her work was recognized by the Electronic Literature Lab for Advanced Inquiry into Born Digital Media alongside other international e-lit women pioneers and visionaries. Her academic trajectory includes full-time faculty at Illinois State University and at Columbia College Chicago; Editor-in-Chief of “Media-N, Journal of the New Media Caucus” (USA), and Lead Editor of “Artelogie” EHESS (France). She currently serves on the board of directors of ISEA (International Symposium on Electronic Art) overseeing the continuation of the annual symposia. She has participated in conferences with her essays and talks in over 15 countries including at the Institute of Cultural Studies ZHdK Zurich (Switzerland); iDAT Plymouth University (U.K.); Sci Center + Lab, UCLA (USA); NYU Steinhardt School of Culture, N.Y. (USA); Kungl. Konsthögskolan/KKH, (Sweden); and University of Bologna (Italy).

Bonnie Mitchell is a practicing artist, online archive developer and a Professor at Bowling Green State University in Digital Arts, in Bowling Green, Ohio. Her current research and creative practice focuses on creation of physically immersive data visualization environments that showcase climate changes over time.  Mitchell’s artworks explore spatial and experiential relationships to our physical, social, cultural and psychological environment through interaction, abstraction and audio. She often collaborates with Elainie Lillios, a composer, to create abstract visual music installations and animations that have been shown in hundreds of venues world-wide. Bonnie Mitchell was also an early net-artist producing numerous large-scope international internet art projects that were shown at ISEA, SIGGRAPH and online starting in 1992, garnered an award from ARS Electronica in 1995. Collectively, Mitchell’s presentations and artworks have been included in festivals, exhibitions, conferences, and symposia in 6 continents and at numerous prestigious events including Ars Electronica, ISEA, SIGGRAPH, Punto y Raya, Visual Music Marathon, Melbourne and London International Animation Festivals, AnimaFest Croatia, iDMAa IDEAS Festival, Society for Electro-acoustic Music, Les Sommets du Cinema d’Animation at the Cinémathèque Québécoise, and many more. Mitchell is also a member of the ISEA International Advisory Committee and ACM SIGGRAPH History and Digital Arts Committee where she focuses on the development of their online archives.