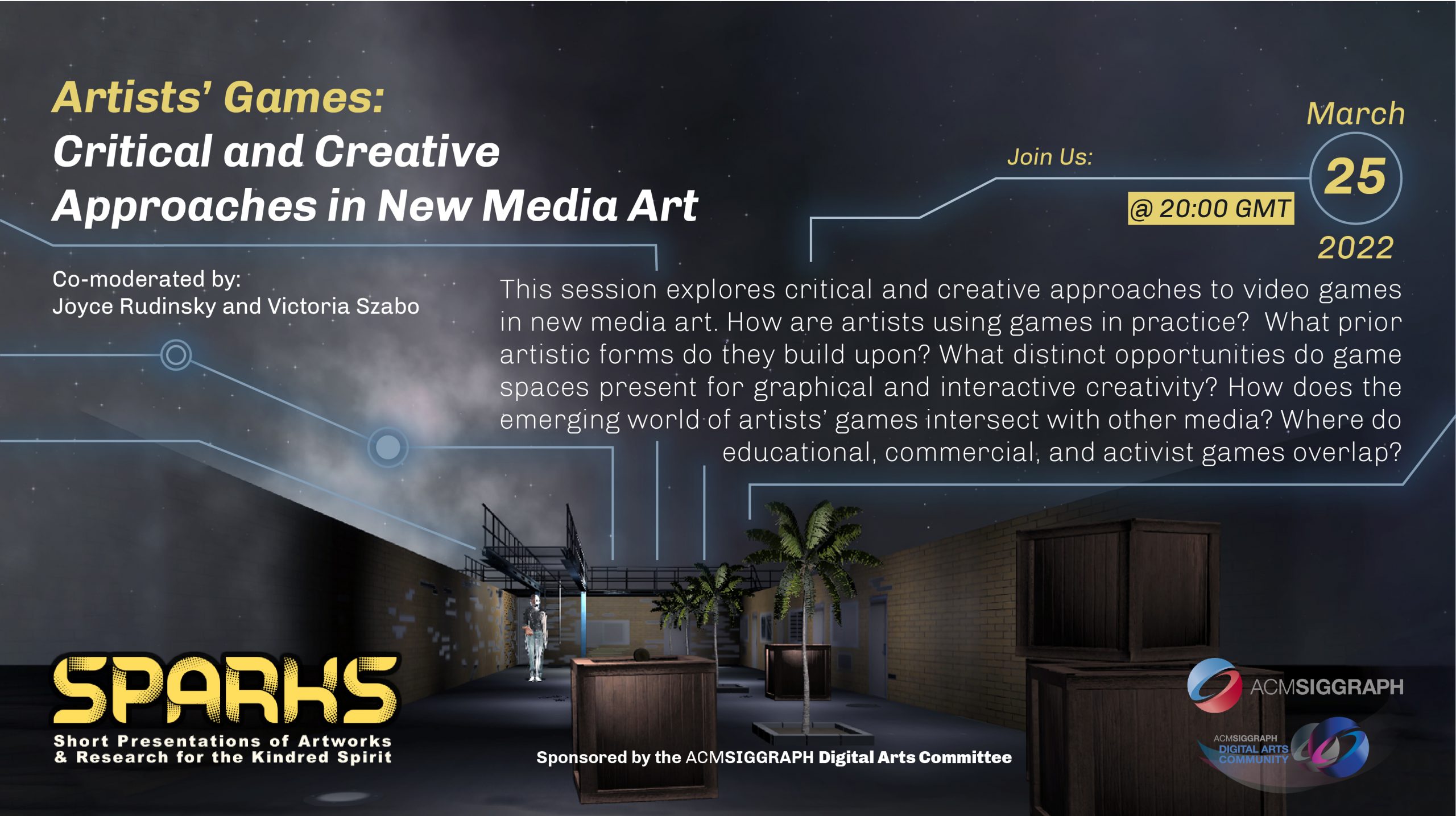 This session explores critical and creative approaches to video games in new media art. We are interested in both artists’ sharing their own work and in critical insights on the field, and in engaging from global and diverse perspectives. Historical and contemporary approaches considered, as well as future forecasts. Platform-based, pc, mobile, web, VR, social, hybrid and other formats and modalities welcome as long as they engage in with games as new media art.

Joyce Rudinsky is a new media artist. Her research explores various ways in which new media changes how we understand and make sense of our everyday lives as we navigate through an information-based society. Her current work with the art collective Psychasthenia Studio, uses interactive, procedural environments to investigate the relationships between psychological conditions and culture. Rudinsky is a Professor at the University of North Carolina.

Victoria Szabo is a digital humanities and computational media scholar/practitioner. Her work explores critical and creative approaches to media and computation with an emphasis on interactive and immersive archives and exhibitions focused around urban history, material cultures, and imagined worlds. She is a Research Professor of Visual and Media Studies at Duke University, Durham, North Carolina, USA. She is Chair of the Digital Arts Community (DAC) for ACM SIGGRAPH.

Rudinsky and Szabo are the principals of Psychasthenia Studio, an interdisciplinary project with members from the humanities, arts, and technology fields.

This talk will focus on methods of changing how we interact with gaming interfaces to both connect them to current events and repurpose aging technology into new forms of interaction. The author will discuss two of his projects, “Weapon of Protest” a Nintendo Entertainment System light gun repurposed as a networked object to protest gun violence and “PrintCade: Invaders” a repurposed set of electronics that were reconstructed to create a novel gaming interface.

Haoran Chang, An Experience of Publishing a VR Artwork on Steam

I will share our experience of producing and publishing the VR artwork, Endless Becoming – Apartment, on Steam, one of the primary game platforms. This piece has attracted more than 16,000 downloads on Steam since its release in October last year. There have been some indie art games available to play on Steam. But there are few reflections on utilizing gaming infrastructure in contemporary art production, curatorial practice, and exhibition. We will share the process of planning, producing, releasing, organizing events, and interacting with players of this project. We borrowed the game design theory, such as MDA frameworks, and the publishing strategy of the game by leveraging the Steamwork system; meanwhile, we learned from contemporary art context in considering the relationship between audience and artwork. By discussing this project, we would like to ask a larger question: Do we need an “Art Platform” to host the works? If so, what this platform will look like, how it is different from the current gaming platform, like Steam. If not, how the gaming platform can adapt to the art exhibitions.

A series of immersive VR/Game interactive art projects/experiments titled “VR = Void Rooms” including Monitoring Room, [FishTank], and WonderForest will be presented in this lighting talks section. This series of artwork was developed following my current research interests bringing the critical inquiry of “what is reality”. According to the French philosopher, Gilles Deleuze, “virtual” is not opposed to “real” but to “actual” which implies the idea of “virtual is real” in my interpretation. In other words, anything that happens in virtual reality should be considered a real experience and that is exactly how VR can expand human senses and what the “Void Rooms” series would like to further explore.

Distant Transmission is an online multiplayer game in which players collaboratively write and perform a nonsensical radio show. The writing portion uses a structure inspired by the surrealist game Exquisite Corpse. Players take turns writing pieces of the script, building off what the previous player wrote but without access to the full context. Players then interfere with each other’s writing, swapping out select words with new ones. Once the script is assembled, the game casts players as characters in the show, and players record themselves performing their lines. Finally, the group listens to their creation together. Distant Transmission is designed to build a non-competitive creative group experience shared at a distance. The game embraces nonsense as a queer method to disrupt fixed meaning. When players are invited to create something nonsensical together, they are free to play beyond the boundaries of what can be recognized and understood.

Terhi Marttila, Speak out – an artists’ game about life in a world of shifting border rules

Speak out is a 2D browser-based multicoloured imaginary world in which You find yourself. Needs, desires and life objectives appear on screen. You can increase Your score by moving You to meet these life objectives. However, border rules may and will change randomly over time, making it either easy or difficult to meet the objectives of You. Luckily though, in this imaginary world, there is a way of changing the border rules, and we hear a voice that sings: “if you want something to change you have to speak out”. This ‘speaking out’ is done by reading out loud poetry about one’s relationship to place, to moving, to not being able to move and so on. In response, the border rules will change, allowing us to observe how different rules impact the life intentions of the multicoloured particles on screen, allowing us also to reflect on our own relationship to place and to movement. Speak out is one component of an artistic research process that looks at notions of migratory movement (migration as movement) through poetry, language, voice and play.

Avital Meshi, Face it! – Playing with a Face Recognition Algorithm.

Face it! is an interactive installation that invites viewers to play with a face recognition system and figure out how it recognizes faces and classifies them in real-time. A variety of magnets showing different face elements are scattered on a magnetic wall; participants can rearrange these elements and create all kinds of different-looking faces. A live feed video immediately captures the surface, and the AI system processes the image. Results of this analysis show classification estimations of these faces’ gender, age, race, emotion, and other features. In the age in which face recognition systems are becoming increasingly prevalent in the public domain, we must become more familiar with this technology and understand how we might be seen through its lens.

Dr Kieran Nolan is interdisciplinary researcher from Ireland exploring the aesthetic, material, and connective properties of arcade videogame interfaces through digital art, design critique and platform histories. He is Co-Director of the Creative Arts Research Centre at Dundalk Institute of Technology. This lightning talk will present a brief overview of Kieran’s game-based artworks Control, Arcade Operator, and VR SuperGun, a trilogy of interactive self-reflexive artefacts that formed the material art-practice element of his PhD. These experimental prototypes combine into an experiential, critically reflective composite overview of the arcade interface. The view of the arcade videogame interface presented in these projects encompasses a holistic perspective reaching beyond the communicative link of the input controls and audio-visual feedback. This expanded interface definition also include the external physical form of the hardware platform and associated peripherals, all communicative links within the system architecture, and the interface as defined by environment and user context.

When producing a work based on a game platform, various delivery procedures such as the form of hardware and web accessibility have to be considered before delivering a message, which puts a great burden on the artist. In addition, when exhibited, the audience shows an infinitely light attitude toward “games in the exhibition hall” compared to the heavy concerns of the artist. From spectators passing by without showing interest to spectators who deliberately cause errors in the game. It is destiny for media artists who use games to create their own media language by reconciling the gap between the audience and the work. As a creator, I would like to introduce my past work on how I have delivered an artist’s message through the medium of games, and I would like to suggest a more successful way for viewers to experience the message of the work.

PAC-MOM is a game parody. It is a practical rethinking of PAC-MAN, a “classic” game. I want to challenge and rethink a canon of games that are uncritically revered by game enthusiasts and often recreated with minor modification by individuals and organizations like Google’s PAC-MAN Google Doodle from 2010. In her book Coin-operated Americans, Carly A. Kocurek describes how video game arcades became a space claimed by boys and young men in the US in the 1980s. A game common to 1980s video gaming spaces was PAC-MAN. Every discipline has its canon of “important” works. The longer a canon exists, the more immutable it becomes. Instead of a calcified collection of works, I am proposing a continuous refiguring of works in a canon to encourage continued questioning of a discipline’s history. Instead of worshiping on the altar of the “classics”, we should be creating alternative views of works seen as “historic”. My impetus for this work is to create a subjective view on PAC-MAN but also to appropriate PAC-MAN, a man-centric narrative, and give it a new life as a feminist game informed by data about hunger as a gender issue.

In this interview I state that the role of beautiful graphics in video game research is just supportive. In a five-minute lightning talk I will share anecdotes from my 15-year tenure as digital artist and art-director at USC research labs to show that beauty is as critical as game-play. I will illustrate the stories with artwork from the particular project.

I will focus mostly on The Cat and the Coup, a documentary video game whose world is an enormous digital collage with elements taken from 12th -16th century illustrated manuscripts from the Middle East, 1950s and 60s news photographs and headlines from ‘trusted’ U.S. publications, and 1970s illustrations of exiled Iranian cartoonist Ardeshir Mohasses. I will deconstruct the Cat’s world as I decode the visual metaphors, and when an understanding of the cultural context adds depth, I will show the source image.