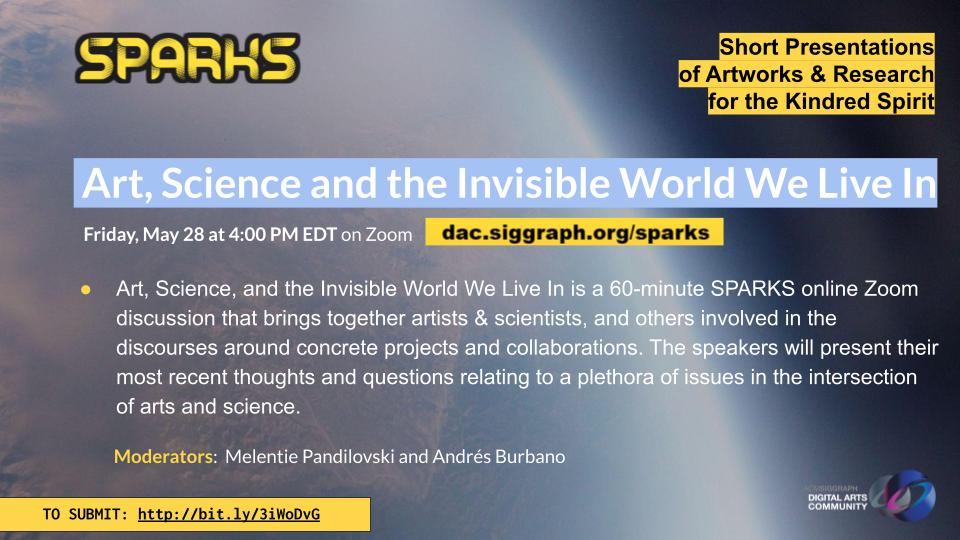 Art, Science, and the Invisible World We Live In is a 60-minute SPARKS online Zoom discussion that brings together artists & scientists, and others involved in the discourses around concrete projects and collaborations. The speakers will present their most recent thoughts and questions relating to a plethora of issues in the intersection of arts and science.

Dr Melentie Pandilovski is a Phenomenologist, Art Theorist/Historian, Curator. His research deals with examining the links between art, culture, science/technology. He is Director of Riddoch Arts and Cultural Centre in Mount Gambier, South Australia. He has curated more than 200 projects including SEAFair (Skopje Electronic Art Fair 1997 – 2011), Laika the True Story, Within the Frame of Refresh, Web Page Design Project, VRML/Web3D Art, etc. He is author of Arts & Science – the Intersection (re)engineered in: “A Companion to Curation, Wiley Blackwell (2019); The Phenomenology of (Non) Habitual Spaces for the Bioarts in: “Naturally Postnatural”, Catalyst Series (2017), “How biotechnology and society co-constitute each other”, Technoetic Arts Journal, Intellect Ltd. (2012); “On Modes of Consciousness(es) and Electronic Culture”, In Glimpse, San Diego, 2000. He has edited Marshall McLuhan & Vilém Flusser Communication & Aesthetics Theories Revisited” (2015); Energy, Biopolitics, Resistance Strategies and Cultural Subversion (2012), The Apparatus of Life and Death (2011), Art in the Biotech Era (2008). Consultant editor of Artlink’s “Bio Art: Life in the Anthropocene” (2014). He took part in numerous Net-Time, Syndicate, Spectre initiatives.

Andrés Burbano is Associate Professor in the Department of Design at Universidad de los Andes, in Bogota, Colombia. Burbano holds a PhD in Media Arts and Technology from the University of California Santa Barbara, and is visiting professor at the Danube University in Krems, in Austria, and the Potsdam University of Applied Sciences, in Germany. “Burbano, originally from Colombia, explores the interactions of science, art and technology in various capacities: as a researcher, as an individual artist and in collaborations with other artists, designers, scientists, and engineers. Burbano’s work ranges from documentary video (in both science and art), sound and telecommunication art to the exploration of algorithmic cinematic narratives. The broad spectrum of his work illustrates the importance, indeed the prevalence, of interdisciplinary collaborative work in the field of digital art.”

Arts and science seem to be human endeavors removed far away from each other. Although, a common question of both the arts and sciences has been interpreting the unseen world. Further on, motifs, metaphors, and models are shared between the arts and sciences. Historically, as pointed out by Arthur I. Miller in Einstein and Picasso√, parallelisms between arts and sciences go a long way back and can be traced in our modern times in the well‐known cases of Picasso and Braque coming up with the concept of Cubism, and Einstein with the concept of Relativity, in the first decade of the twentieth century. Einstein was well aware that the most outstanding scientists are artists as well. The influence of Jules Henri Poincaré’s Science and Hypothesis (1902) on the artists of the age, and especially the chapters on the origins of geometry, seem to tell us that the origins of Cubism are not entirely rooted in the arts. Still lurking in the depths are some of the most challenging and unresolved questions arising from the breakdown of communications in society, such as the relationship between the arts and the sciences, which has plagued humanity throughout the more significant part of the twentieth century.

This was described by C.P. Snow as the rift between the two cultures, in his celebrated 1959 lecture series of that title, with the exception that Snow saw in this breakdown a chance for humanity: The clashing space of two subjects, two disciplines, two cultures, – of two galaxies, so far as that goes – ought to produce creative chances. In the history of mental activity, that has been where some of the breakthroughs came. The possibilities are there now. But they are there, as it were, in a vacuum, because those in the two cultures can’t talk to each other. It is bizarre how very little of twentieth-century science has been assimilated into twentieth-century art. (C.P. Snow 1959). Since then, we have moved on a fair bit, and there truly have been remarkable Arts & Science collaborations. Phenomenology demands the reinterpretation of the world as we interact with it through an immediate experience. It insists on the same demand for awareness and the same will to seize the meaning of the world as that meaning comes into being. The intersection of science and art finds good use of the accounts mentioned earlier and one of the fundamental characteristics of phenomenology, making a distinction between appearance and essence. Merleau‐Ponty’s conception that phenomenology is the study of essences resounds very well with arts – sci artworks.

Joe Davis says: Like science, Art is a quest for knowledge. Few recall that for thousands of years, art was a principal instrument used by Homo sapiens to undertake the Apollonian search for secrets of God and nature. Only in recent centuries have special injunctions been adopted which proscribe artistic activities that might be confused with research and scientific inquiry. Students of art in our own era will generally have no idea that artists contributed to the invention of mathematics, astronomy, chemistry, physics and biology. This constructed separation of art and science has left little room for individuals who work outside contemporary frameworks of thought and language. Scholars of the humanities now acknowledge that this separation of arts and sciences was an artificial one perpetuated by centuries of history that turned metaphysics into the foundation of all things artistic. Yet, the machinery of this historical artificiality and its categories has assumed a kind of de facto reality. Until we can learn to think without the modern classifications of art and science, it will be difficult to encounter borderlines, interspaces and hybrids.

Another view has been suggested by the British artist Gina Czarnecki, who has suggested there never was a gap, but just the perception of one (Science, technology, culture, innovation and their associated socio‐political drivers are inter‐related and there is an increased acknowledgement of the mutual evolution and the spaces between.)

Gary Cass, Australian biologist turned artist, is absolutely convinced that most of the world’s universities, the bastion of all knowledge, have recognized the value of cross‐disciplinary research, and that includes the arts and sciences crossovers, focusing on artistic and scientific creativity.

As motifs, metaphors, and models are shared between the arts and sciences, a large part of the public representation of science plays a crucial role in the wider interaction between sciences and the arts. Eugene Thacker tells us that “molecular biology is one field that consistently shows that metaphors matters”, primarily referring to the metaphor of information as applied to the living, and the resultant ways in which we increasingly come to regard life as defined by and through information. Iina Hellsten discusses the “politics of metaphors,” focusing on metaphors as flexible tools of making sense of the world and communicating these views to others.

Peter Weingart points to the historical evolution in society of both mass media, and the sciences, both of which have their own logic, yet in contemporary society they are becoming interwoven. All, however, vie for their structural possibilities, and the deciphering of their ontological reasons for being, which results in different actions being taken, and evolving metaphors being used for the scientific and public discourses.