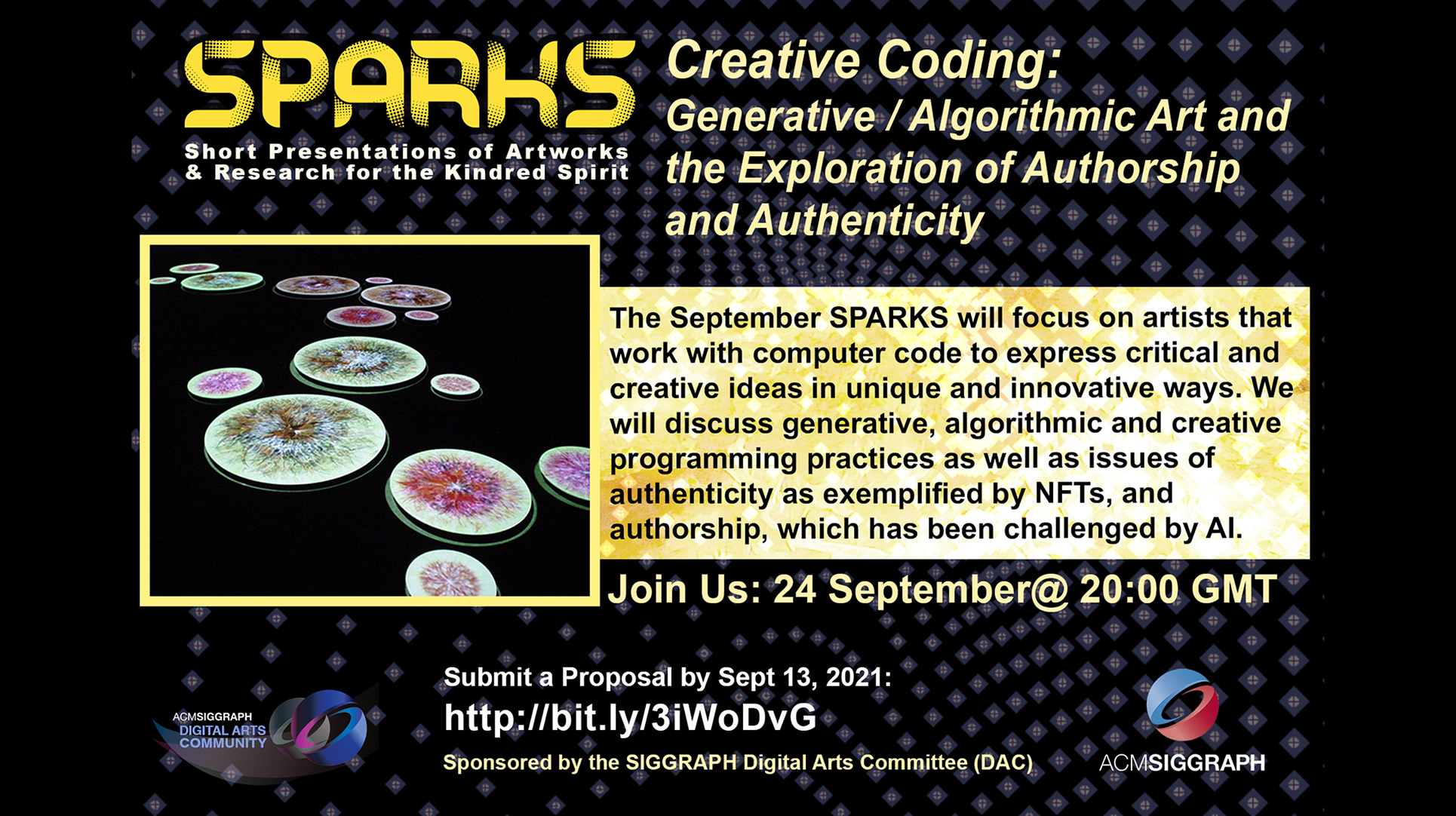 The ACM SIGGRAPH Digital Arts Community (DAC) sponsors monthly conversations around topics of interest to our community. 8-10 lightning talks selected by the moderators are followed by question and answer and open discussion with all the participants. All are welcome to join. Sessions are usually also recorded for future access and archived on the DAC website.

All are welcome; space limited to 100 signups

Creative Coding: Generative / Algorithmic Art and the Exploration of Authorship and Authenticity

The September SPARKS is focusing on artists that work with computer code to express critical and creative ideas in unique and innovative ways. The works presented are related to generative, algorithmic and creative code practices as well as issues of authenticity (as exemplified by NFTs), and authorship (which has been challenged by AI).

The information age was ushered in with a radical disruption to the definition of art and authenticity. In the 1960s, pioneering artists began writing computer code to create their art. By collaborating with, and controlling the computer to produce the work of art, these artists challenged society’s notion of authorship and authenticity.  Most code could be easily replicated to produce similar results without the original hand of the artist. Code that went beyond basic commands and involved randomness, artificial intelligence, and machine learning produced works that superseded artistic intent and shared agency with the machine.

Today, computer code plays an important role in the production of a wide variety of types of artworks including interactive art, design, algorithmic art, animation, generative art, architecture, internet art, and so much more. Computer code does more than define the output of a work of art, it enables the artist to explore complex systems such as chaos, order, complexity, simplicity, regenerative processes and other dynamic systems that sometimes defy human comprehension. Through coding, the artist is free to break free of the limitations and constraints of software and traditional media and invent novel solutions to creative problems.

The controversy and excitement surrounding NFTs has also sparked a resurgence of interest in the issue of authenticity of a digital entity.  As an artform that has traditionally had little to no economic value on the market, digital art produced using code or otherwise, is now sometimes sold for millions. How did this happen?  Authorship is also being challenged as Generative Adversarial Networks (GANS) create works of art replicating existing styles. Artists using these systems often relinquish some artistic control to a system that was created using machine learning algorithms and now no longer needs them to direct the whole process.

Casey Reas’ software, prints, and installations have been featured in numerous solo and group exhibitions. His work ranges from small works on paper to urban-scale installations, and he balances solo work in the studio with collaborations with architects and musicians. Reas’ work is in a range of private and public collections, including the Centre Georges Pompidou and the San Francisco Museum of Modern Art. Reas is a professor at the University of California, Los Angeles. He holds a master’s degree from the Massachusetts Institute of Technology in Media Arts and Sciences and a bachelor’s degree from the College of Design, Architecture, Art, and Planning at the University of Cincinnati. With Ben Fry, Reas initiated Processing in 2001; Processing is an open-source programming language and environment for the visual arts.

Bonnie Mitchell is an exhibiting artist and experimental animator, as well as an online software developer and Professor at Bowling Green State University in Digital Arts, in the United States. Her current research and creative practice focuses on writing code to create physically immersive data visualization environments that showcase climate changes over time.  Mitchell’s installations typically explore spatial and experiential relationships to our physical, social, cultural and psychological environment through interaction, abstraction and audio. She often collaborates with Elainie Lillios, a composer, to create abstract visual music installations and animations that have been shown in hundreds of venues world-wide. Also, Bonnie Mitchell’s early internet art projects (1992-2000) were exhibited at ISEA, SIGGRAPH and other international exhibitions, garnering an honorable mention from ARS Electronica in 1995.

Authorship and Distribution of Source Code in Creative Coding Works: Problems and Potentials

Creative coding practices have had a critical relationship to concepts of authenticity and authorship in computational spaces for many years. Grahame Weinbren wrote in 1997 about the questions of authorship raised by John Simon’s “Brushes;”  Adrian Ward’s 2001 “Auto-Illustrator” addressed the precarity of authorship for users of creative software tools. Open source principles of releasing and sharing code historically center utilitarian software, but they have been adopted by many creative coding artists over the years. However, in many creative coding works, the code is highly specific to the subjective conceptual and aesthetic properties of the artwork. In these cases, some artists opt to keep the source code proprietary. Yet many distribute their code anyway, often for pedagogical or self-promotional purposes. When artists share code so integral to the subjective aspects of their work, do we inadvertently encourage the authorship problems “Auto Illustrator” highlighted within creative coding practices? What kinds of code tends to be shared, and what kind does not? How might NFTs further impact the distribution of creative code — and thus, the coding work that influences students and other artists?  Might NFT’s paradoxically encourage a more diverse open source creative coding ecosystem? This lightning talk will touch on these historical threads and contemporary questions.

The Zombie Formalist is a satirical body of work centering on generative light-boxes that generate geometric abstractions in response to audience attention. The project points to the intersection of art as commodity, surveillance capitalism and the automation of intellectual work through AI. The Zombie Formalist is the autonomous artist in your home; it learns what you like and creates more of what you want to see. The Zombie Formalist uses face detection, Twitter and machine learning to create conceptually vapid formalist compositions whose properties are tuned according to, and their value wholly derived from, the preferences of the audience / market. Light-boxes generate images from random parameters in the style of painters such as Gene David, Barnett Newman, Kenneth Noland, and Karl Benjamin. The light-boxes are marketed as high-tech objects where materials emphasize minimalism and elegance presented in stark contemporary spaces such as those in architecture and interior design magazines.

Piping Workflows, Or Outputs to Inputs and Back

In UNIX piping allows for the output from one program to be used as the input for another. Using this framework we can explore Generative Art not just as an output but as system of inputs situated within larger artistic workflows. Furthermore, shifting the view to the entire workflow creates opportunities for human intervention and curation. I will explore the implications of this framework and how I use it in my own artistic practice along with examples from other practitioners who are exploring similar themes.

StyleGan2 – Who Owns This Image?

This talk will encompass a brief description of audiovisual live-coding performance practice. Then, how machine learning’s generative visual aesthetics integrate into this genre. Lastly, questions are proposed regarding the ethical and philosophical implications of machine learning’s curated image-based training data and consideration of image authorship when generated from a neural net’s latent space.

The rapid co-evolution of technology and typography has uncovered possibilities for creating immersive experiences that push the limits of expressivity. Increasingly, emerging forms of media are beginning to encompass temporal and interactive behaviours. This project envisions Kalidāsā’s venerable poetry — Meghadūtam — as interactive, three-dimensional typographic forms, moving through space. Type is viewed through the lens of computation to weave form, motion and interaction to take readers through the poem’s emotional journey. If poetry is a mere shadow of emotions felt, by asking a shadow to dance, we urge to bring words to life, to hold a stronger presence, a deeper voice.

Shared Ideas, Grief and the Daily Practice of Drawing with Code

Villares has a daily drawing with code project (github.com/villares/sketch-a-day), and to keep going he has adopted a few strategies, especially for hard days. Last December, he lost his father, it was a particularly hard time. He reached out for an idea he learned from Takawo Shunsuke on Twitter, a visual idea he had explored many times. He will show a series of sketches from this idea and a final work presented at the PCD Brasil 2021 virtual gallery.

Achieving the Interplay of Visual and Music with Creative Coding

Visual music happens through carefully controlled timing, movement, rhythm and choreography of visual elements that are linked with the musical riffs and patterns. In comparison with early visual music work, creative coding and computer analysis provides the artists the technical precision to achieve the interplay of visual and music, offering audience a sophisticated audio-visual experience, potentially engage the audience with a more primal, visceral perception and attention. This short presentation will discuss some of our attempts in developing such interplay in the hope of provoking emotions via a unity of sensation.